BEHIND THE VIRUS: Julie Coburn

July 1, 2020 / FIRRIMup Doctors' Good Medicine / Comments Off on BEHIND THE VIRUS: Julie Coburn

Julie Coburn barely remembers the 10 days she spent in the hospital. 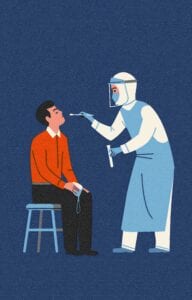 A U.S. citizen born on Italian soil, the 36-year-old returned from a trip to Italy to visit family in March.

She experienced odd symptoms that resembled a looming sickness. Tightness in her chest, a dry cough and shortness of breath that to her mirrored a 30-year-old smoker.

“It’s just allergies,” she told herself.

After all, she did visit her grandmother’s house, who has been a smoker for as long as she could remember. She figured the potent smell of the smoke triggered her allergies to flare. The intensive care unit (ICU) would soon tell her otherwise.

When she flew home, she constantly coughed in her elbow, doing her best to avoid spreading her symptoms to others. She had to stop and catch her breath on the short walk from the exit terminal to baggage claim.

For the last 10 years, Julie had been living with the autoimmune disorder Rheumatoid Arthritis, meaning she was more susceptible to catching whatever was crawling in a germ-filled airport.

Her trip was scheduled for February 15 and she returned on March 3. Any other year, these dates would have meant nothing. However, by mid-February, the pandemic was only about a month away from taking the world by storm.

COVID-19 originated in Wuhan, China, as early as November 2019. The respiratory disease affects your nose and upper throat with symptoms including fever, coughing and shortness of breath. The severity of the virus depends on the patient, usually heavily impacting those who are immunocompromised.

Coburn was no stranger to the virus, as her job at the U.S. Department of Veteran Affairs (VA) constantly kept her informed.

“Leading up to my trip, I was getting email updates from the VA about COVID-19,” Coburn said. “Before I left, they still hadn’t said anything about Italy being a hotspot, but I knew it would be a bit tense, so I was nervous about flying.”

Unbeknownst to Coburn, the number of positive cases were being fiercely underreported by Italian media. A few days after her departure, the entire country of Italy was locked down.

Coburn was scheduled to work the day after her return, but her boss advised her otherwise, and required her to stay home and quarantine for 14 days.

To her, it was extremely unlikely she had COVID-19. The airport took her temperature and cleared her before entering Italy. She practiced social distancing to the best of her abilities while visiting family. Milan and Venice were locked down, but she spent most of her time with family in Vicenza.

But reality soon struck. She found out from a relative that her cousin had traveled to Milan during her trip, coming into direct contact with people who tested positive for COVID-19.

“My aunt kept saying, ‘He has a fever. Wait, no, he doesn’t have a fever,’” Coburn said. “At one point, we went by their house to see them. I stayed at least six feet away from everybody, but of course I got sick.”

A quick call to Dr. Akey’s team at North Florida Integrative Medicine confirmed concern that her symptoms were much more severe than she thought. Dr. Akey, who has been Coburn’s primary care doctor for the last several years, recommended she go to the Alachua County Health Department per the protocol established at the time by the CDC.

Coburn spent the next few days relying on over-the-counter medicine alongside antibiotics recommended by Dr. Akey to suppress her symptoms.

However, her chest pains and dry coughs took over. Her lungs were getting weaker by the second. The symptoms were unbearable.

She needed to go to the hospital.

Coburn remembers being placed in a negative pressure room with an N-95 mask. Her first swab test at the hospital came back positive for Respiratory Syncytial Virus (RSV) pneumonia, resulting in her being moved from the regular floor to the ICU.

Moving to the ICU is something Coburn thinks helped her beat the virus. ICU medical staff closely monitored her for six days. While in the ICU, Coburn took another swab test, which again came back negative for COVID-19 and positive for RSV only.

Coburn’s lungs were so fragile that it was difficult for her to use an inhaler and hold the contents of it for a mere 10 seconds.

After her days in the ICU, she started to see slight improvements. She was moved to the regular floor for the remaining four days of her stay where her meticulousness played a major role in her recovery. Coburn made sure her nurses stayed on time when giving her medicine, calling them as soon as she felt her previous dosage wearing off.

“By the time I got there … I was basically doing everything I needed to do on my own,” Coburn said. “Once they saw I was taking care of myself, they said, ‘Okay, we’re going to send you home.’”

Coburn’s trip to Italy resulted in her contracting two severe viral illnesses – RSV pneumonia and COVID-19. While in the hospital, however, it was never confirmed that Coburn had COVID-19.

It was not until two months later, in late May, when she tested positive for COVID-19 antibodies. Her lungs have been very weakened since.

Every day is an adjustment for Coburn as she learns to live with weakened lungs. Coburn has continued to quarantine after her hospitalization and is fortunately investing her energy into something positive.

Having always been the crafty type, she used what fabrics she had in her home to start making and selling masks. Since returning home, she has made between 200 and 300 masks. 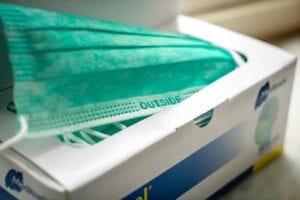 She plans on continuing her mask business while quarantined. She hopes that life will soon return back to normal, not just for her, but for the rest of the world.

Julie’s masks can be found at https://www.etsy.com/shop/JuliesCraftorium.